I can’t believe I got all the way through January (and halfway into February) without posting anything. I guess it was a busy month – mostly with work and a week or so of being ill with a virus.  I’ve started quite a few posts but not quite managed to finish any of them.  Hopefully I’ll rectify that over the next few weeks.

I wanted to tell you about a creativity course I went on in the North of England near the beginning of the year.  It was called ‘In His Image׳.  It was basically about God as Creator and how each of us is creative because we are made in His image.  As you know, if you’ve read some of my previous posts, identity is something that has been on my mind a lot over the last year or more.  They said some interesting things about that that really resonated with me.  They talked about how God really likes the diversity of choices and opinions that his children have.  I totally believe that and yet I feel like we so often do everything we can to be the same as everyone else, to make the same choices and have the same opinions.  They also talked about the subconscious controls that come in as we become adults – we limit our choices and keep things battened down and in doing that suppress the true us.  I know I’ve done this with my life – tried to conform and be who I felt others expected me to be and lost the real me (I’ve been working on finding her again but it takes time).  They were encouraging everyone to find space to express themselves through creativity and in doing that let God get to us on the inside.

So we had the opportunity to try out various creative activities.  The first activity we (I went with my mum) tried was creative writing.  I guess that was kind of a safe option because I know I like to process by writing stuff and I know how to teach creative writing to children.  Having said that I’ve not really done much creative writing of my own in a long time.  What I produced probably ended up being more of a processing piece in the end again anyway but it was basically about hope.  Here’s what I wrote:

“My HOPE is built on nothing less than Jesus blood and righteousness.”
Stone by stone and brick by brick it’s built and grows until I really believe it’s there
And there is HOPE.
Because of Jesus I have HOPE.
He took my sin and made me whole.
He is the one who holds my future.
He has a plan and a purpose for me.
HOPE is a foundation on which I can build
And He can build me up.
Hopelessness brought me to nothing.
Empty and torn. Broken and bruised.
But HOPE in Jesus brings light – a crack of light at the end of a dark tunnel.
It brings life – like a new flower opening its petals in the Springtime.
HOPE in Jesus brings fresh grace and strength
To get me through each day.
And not just get through but blossom and grow.
I need to let that little seed of HOPE take root.
Deep in my heart.
Take root and then split open to allow that tiny shoot to appear.
Pushing through the darkness.
It doesn’t take long before it reaches the surface and breaks through.
And then that little shoot starts to speak.
It is noticed by others and God uses its life, its journey,
To speak and bring healing to those who see it.
The journey, the growth, is painful at times
But as the shoot grows it gets stronger.
It is able to withstand the wind and the weather.
The plant blossoms and it thinks it’s made it.
It’s fully grown and developed but it’s not the end.
It’s only the beginning of a new season.
Petals fall off and in the winter season the plant doesn’t seem to be much use
For anything.
It just stands there
Weathering the storms.
Until
The Spring comes again and once more it blooms.
This time there are more blossoms
And God uses the plant to speak to even more people.
It is a new season.
Winter is not forgotten but it is gone and new life springs forth.
What is the purpose of the seasons?
Why can’t it always be Spring and Summer?
Why can’t the flowers always bloom?
God designed it this way for a reason.
In the storms strength comes.
Because of our pain we can empathise and help others.
He knows the bigger picture.
He sees the end from the beginning.
He sees the whole timeline of our lives with all the seasons and the ups and downs
And it makes sense to Him.
He knows there is HOPE because He can see the end.
He knows the joy that is set before us.
He has a good plan.
I put my HOPE and my trust in Him.

Hope turned into a bit of a theme for me that day, as you’ll see, and I decided to go to woodwork next.  My last experience of woodwork was at high school.  We had the same teacher for woodwork, metalwork and technical drawing.  I quite enjoyed ‘techy’ subjects and wanted to continue with technical drawing when I chose subjects to go on and do exams in (at the time I fancied being an architect).  The teacher was pretty old school and wouldn’t let me take the subject because I was ‘a girl’.  I don’t remember why I let him get away with that at the time.  It definitely wouldn’t wash now.

My first experience of woodwork is also quite memorable.  I was in Primary 1 (4 or 5 years old) and we were making ‘trains’.  Basically they were pieces of soft wood about 1″x2″ that we made a straight cut through and then cut at a 45 degree angle at one end to create an engine shape.  Then we coloured them in with felt tipped pens to look like trains.  It was actually pretty cool at that young age to be allowed to use a hand saw (just a little one).  Anyway at some point during the sawing (I don’t remember exactly when) I sawed right into my thumb.  I then felt sick and fainted 🤢  and my mum had to be called to take me home 😂..

Anyway back to the course.  So I learned a few things about woodwork.  I wanted to make the word HOPE out of wood.  They explained how to go about it and then let me loose with their tools – they’re brave!  I had to draw out a template and stick it to the wood using masking tape and glue.  Then I cut it out using a scroll saw and sanded and waxed it.  That was something new I learned – I always thought that lovely smooth, polished, almost velvety wood was a particular type of wood but they explained that it was down to the sanding and waxing which I think is pretty cool.  Am I a bit sad getting so into woodwork? 😂   Maybe I’ve found one of my creative things? 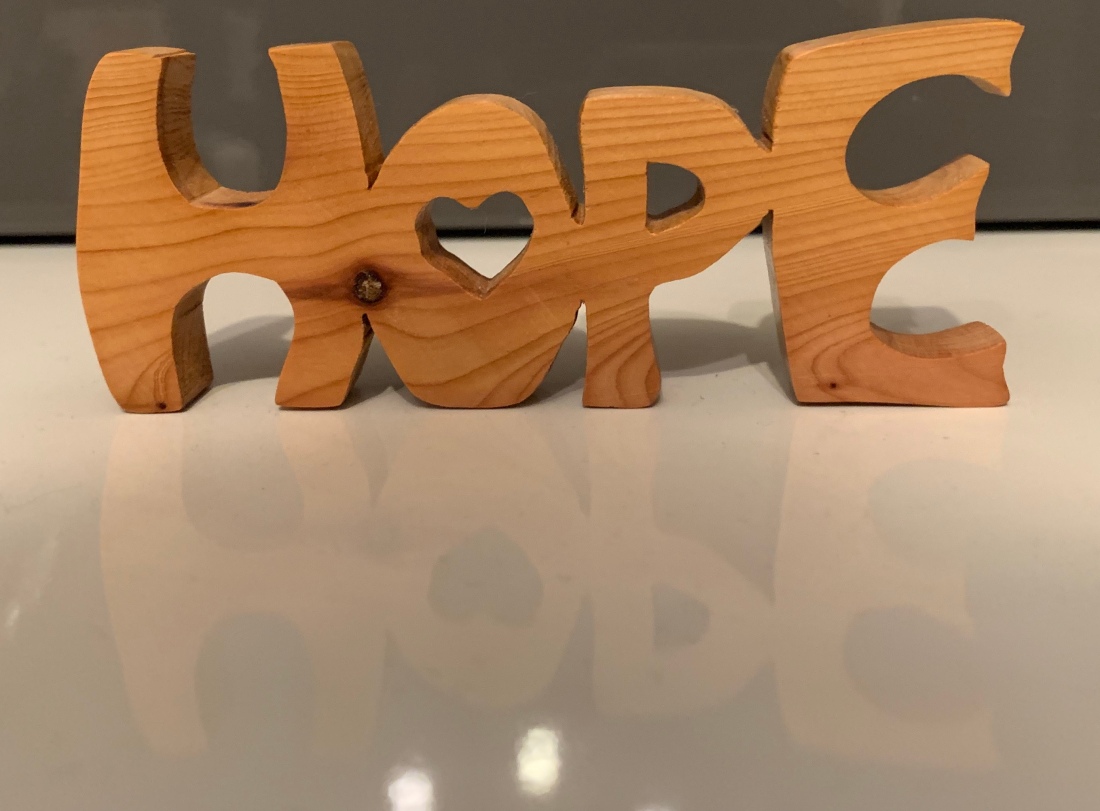 After I tried woodwork I only had an hour left of the practical session and I wanted to try needle felting.  It was fun too.  Is it worrying that I found the stabbing action quite therapeutic? 😂   Anyway I didn’t have time to do anything very detailed there but I managed to produce something I was quite happy with considering the time I had. 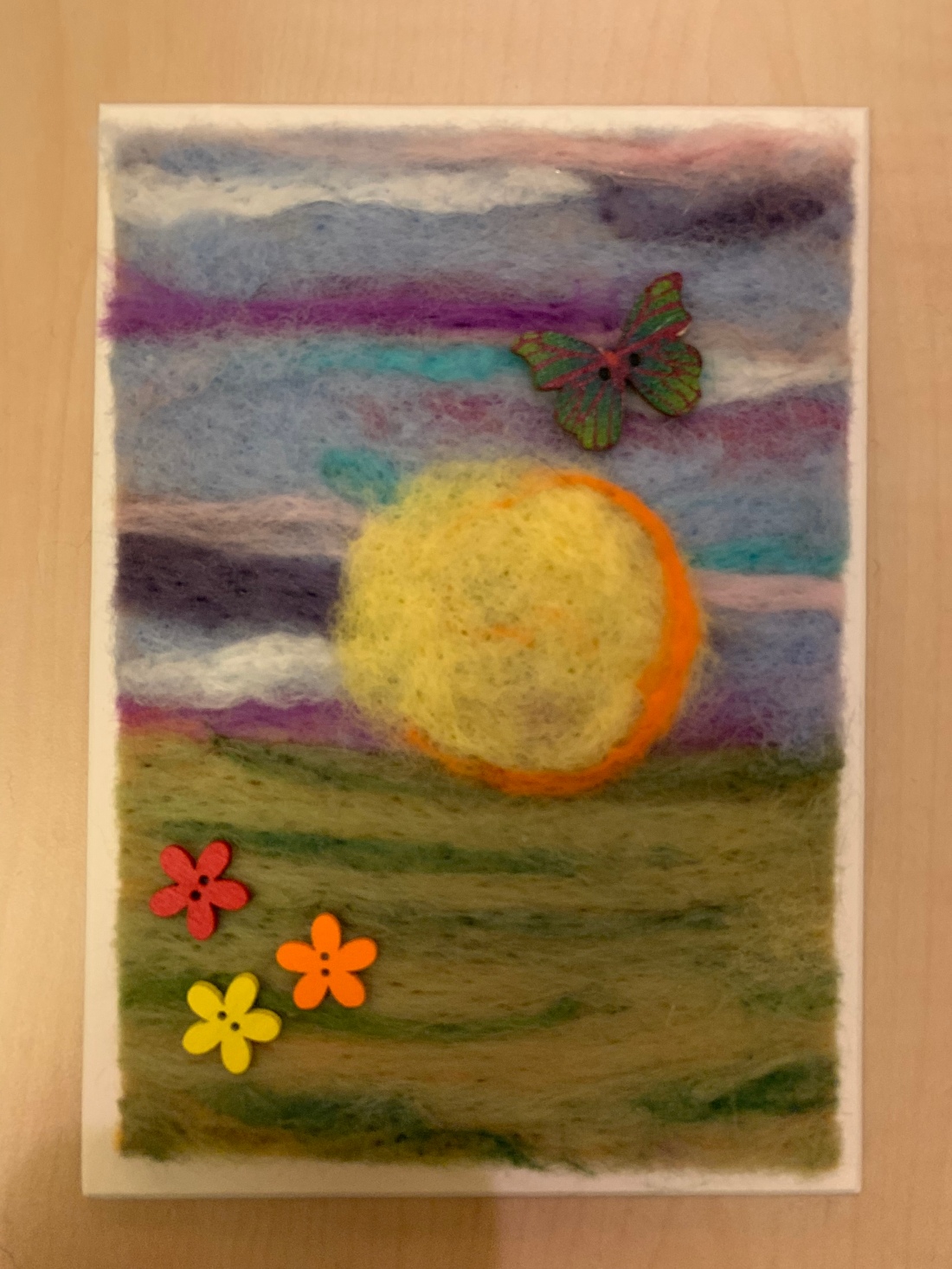 Since then I’ve done another couple of creative things.  I’ve completed a short online photography course which was really cool.  Hopefully I’ll get a chance to practise a bit when the weather improves.  I’ve done a bit of sewing too.  I was making some blankets for my kids relaxation classes – I cheated really ’cause I actually bought some blankets and then just cut them in half and hemmed them again.  It was cheaper than buying the fabric to start from scratch though – crazy that huh?

Anyway I know I need to make space in my life for creativity and that could include this blog.  I just need to take some of my own advice and make time for this stuff.  Often the hardest thing – taking your own advice.